Klanghelm MJUC VST Crack is the most time-consuming Klanghelm plugin yet. Extensive, dare I say “extreme” research and development took nearly two years. To make MJUC, I studied and examined every variable-mu* implementation I could find in order to combine the best tube compression into a single processor. Three alternative models were created to adequately represent the variability of this compression topology. These are a form of time voyage through tube compression’s history, capturing the soul of each generation. Each model has its own signal path as well as its own set of controls. With the TIMBRE and DRIVE controls, you may adjust the overall tone and saturation of each model if necessary. If appropriate, DRIVE controls the load of the input and output transformers as well as the saturation of the tube gain stages. The TIMBRE expands the capabilities of the MJUC as a tone-shaping tool.

MJUC is the first Klanghelm plugin to be developed using a new framework. That adds a slew of new usability features, like GUI resizing, AB-ing, and a platform-independent preset browser with save/copy/paste/save-as-default functionality. You can also change the knob’s behavior, enable tooltips, show/hide value labels, and more. All of these capabilities will be included as soon as possible in the existing Klanghelm plugin. Model Mk1 is inspired by early variable-mu* prototypes from the 1950s. Although it does not produce any audible “thumping” due to its extraordinarily high control voltage, most other variable-mu* systems suffer from high GR and quick timing constants. It also has a fairly straightforward signal flow, with compression occurring directly in the audio path. As a result, the compression nature is very natural, with very little distortion. Mk1’s extraordinarily dense and thick character is accentuated by the arrangement of four(!) variable-mu* levels. The Mk1 is MJUC’s most colorful model.

Model Mk2 is based on the more sophisticated 175 and 176 all-tube predecessors to the iconic 1176 FET compressor from the early 1960s. It has four ratios and a density switch that enables a second variable-mu* stage and minimizes the attack and recovery times’ program reliance to a minimum. It also allows you to activate the interstage transformer, which reduces overall noise and distortion while enhancing compression. The second model is less jazzy and more rock’n’roll than the first, with more created harmonics and a more forward-sounding nature. Model Mk3 is the MJUC model with the least amount of color and the strongest Hi-Fi sound.

It’s Klanghelm’s take on this compression topology in the present day. The unit’s circuitry is totally different, making it very quiet and practically distortion-free. This is the only design idea drawn from another modern notable variable-mu* comp. But the truly unique feature of this approach is that the actual compression is handled by two different variable-mu* stages that function in opposition to one another, one feedforward and the other feedback. This produces a snappy, attack-enhancing compression that sounds unexpectedly similar to a British G-type bus compressor rather than a 670. 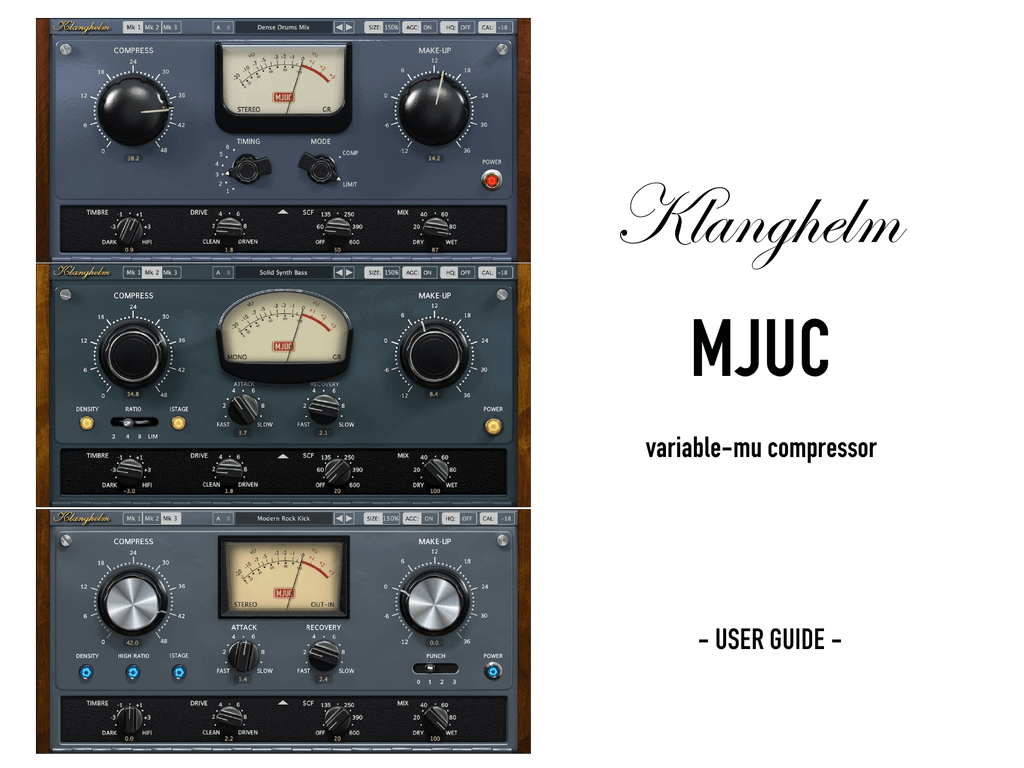